‘Treasure Discovered Between the Floorboards!’ (You Have to Crack Some Eggs…#5) 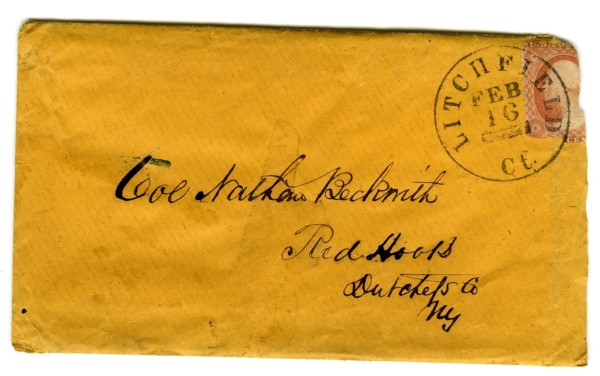 I have worked on many old homes over the years, including my own.  The ‘Holy Grail’ of old home restorations is to find an artifact that reveals something about the early or original owners.  Those who are lucky enough to find an artifact, solidify the link between our century and theirs and their families and ours.  I have never found anything like that, but have been content with initials on beams and the well-worn marks in our floors.

During a recent site visit to the old home we are renovating and have been writing about in the blog, the owners and the rest of us were discussing some details when Paul, the lead carpenter walked up with a small brown envelope in his hand.  He had been hammering on a beam when he saw something drop from between the floorboards.  It was a small brown envelope postmarked Litchfield, CT and was addressed to the original owner of the house, Colonel Nathan Beckwith.  The excitement began to build, and when we pulled the letter out, to our delight, it was from the owners’ son, Dr. Josiah Beckwith written February 15th, 1861.

One of the most amazing things about the letter was the fact that it was in perfect condition, and looked as though it were written yesterday.  The current owner of the house found a photo of Dr Beckwith in the historical archives of Litchfield Connecticut.

The letter sounded in many ways, like something a grown son might write to his father today.  The following is the best transcription we could come up with. 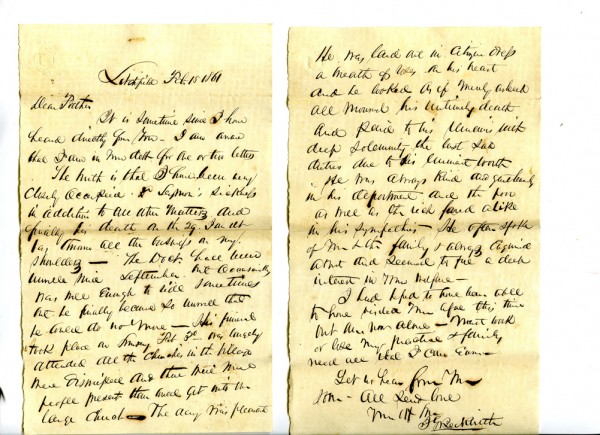 It is sometime since I have

heard directly from you – I am aware

that I am in your debt for one or two letters.

The truth is that I have been very

in addition to all other matters.  And

has thrown all the hardship on my

shoulders  –  The Doct. had been

unwell since September but occasionally

was well enough to bide sometimes

but he finally became so unwell that

he could do no more  –  his funeral

attended.  All the churches in the village

people present than could get into the

large church  –  The day was pleasant

He was laid out in Citizen dress

a wreath of roses on his heart

and he looked as if merely asleep.

All mourned his untimely death.

And  paid to his  remains  with

duties due to his  eminent worth.

He was always kind and  gentlemanly

in his deportment.  And the poor

as well as the rich fared alike

in his sympathies  – He often spoke of

you and the family & always enquired

about and seemed to feel a deep

interest in your welfare –

I had hoped to have been able

to have visited you (after?)  this time

but am now alone – Must work

or lose my practice & family

need all that I can earn –

Let us hear from you

You never know what you will find while renovating an old home, but I can’t imagine it getting any better than this.