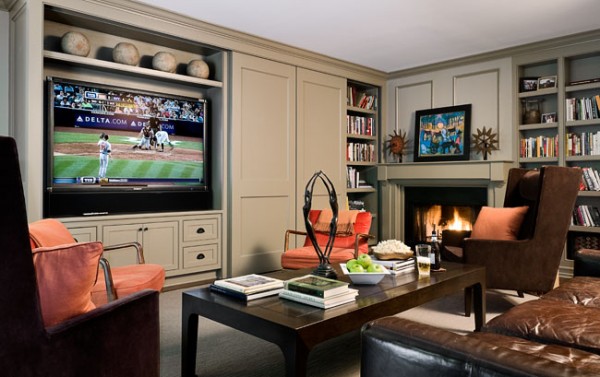 According to the Murphy Bed Company, William L. Murphy and his wife lived in a one-room apartment in San Francisco around the turn of the century.  Since their standard bed took up most of the floor space, he began to experiment with folding bed designs and eventually patented the ‘Murphy Bed’.

Recently we have been asked to design rooms incorporating a ‘Murphy Bed’, and have found them to be very useful.  Whether it turns an office, a TV room or a library into a bedroom, it can be an elegant solution and often works better than a pull out couch.

Popularity of the ‘Murphy Bed’ has waxed and waned thru the decades since its creation with a peak in the 1920’s and 1930’s. The greatest need for the bed is when there is the greatest need for the efficient use of space.  Today, instead of adding a room, it is far more cost effective (and space effective) to make a multipurpose room, which at a tug on the frame becomes a bedroom.

We were particularly happy with an entertainment room we designed used to watch programs on a wide screen TV, which quickly converts to a bedroom where the ‘game watchers’ can sleep.

Cramped city apartment dwellers have long been a major consumer of Murphy Beds, but we have seen the owners of country getaways make use of Mr. Murphy’s invention in a big way.  If an overflow of guests only comes once or twice a year, a temporary solution is sometimes the best solution. 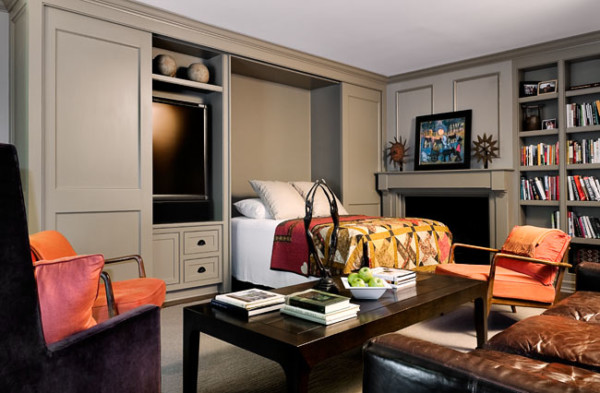